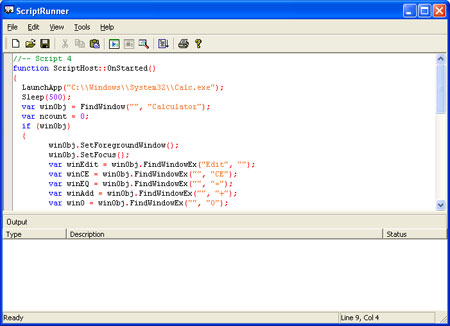 Initially, ScriptRunner was created with the intent to simulate a user interaction with an application. But in the end, this tool has evolved. Now, it provides a simple TRACE library to capture the application state and of course, report any error in your program.
Typically with CPP Unit (or other framework), you write the code to test your function passing both correct and error values to verify whether it behaves correctly. These tools are great and if you choose to test enough important functions, you can get very good coverage and find bugs (or broken code) easily in your program.
But one aspect that is lacking, is how do you test the User Interface to achieve the same result? ScriptRunner can help you do that! You can write simple script to interact with your application and use the ScriptRunner TRACE library to display any success or failure.

How Does it Work?

ScriptRunner is a Scripting Host application. It provides a set of interfaces to execute an application, manipulate a window and submit input to your user interface as a user would normally do. Several commands are available to configure and run a test script. I am assuming everyone will recognize the standard icons and know what they are used for. Now, let me describe the other icons to get you started.

ScriptRunner exposes only one event handler OnStarted. It is the recommended main entry point to run your script. In JavaScript, use this prototype
function ScriptHost::OnStarted().

As stated before, a C/C++ application can send output to ScriptRunner output window. For this end, you will have to include a set of files in your solution.
CTracer.h : This is used to hook OutputDebugString calls from your program.
SocketHandle.h, cpp : Socket API used to communicate with ScriptRunner.
HookImportFunction.h, cpp : PJ Naughter's Hook Import function (Click here)(Copyright © 1999; PJ Naughter)